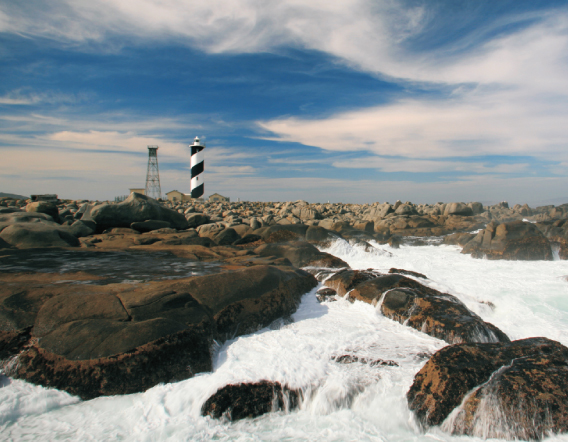 “We are told to let our light shine, and if it does, we won’t need to tell anybody it does. Lighthouses don’t fire cannons to call attention to their shining – they just shine” – Dwight L. Moody

Watching lighthouses from unique spots all around the country has become a hobby and a good excuse to venture to some of the most remote and rugged outcrops of our country – often on the backroads and off the beaten track. Over a number of years, I have made it a personal mission to take the slight detour to the nearest lighthouse in the area, as far as Jesser Point lighthouse near Sodwana Bay in the northern part of Kwazulu Natal all along the coastline as far as Port Nolloth on the West Coast of Northern Cape. Being a keen photographer, the lighthouses often allow dramatic and interesting photo opportunities.

Over time, I have found that each of the lighthouses has a “personality” much like people do. They have a character and an “aura”, they speak their own language, their look with colour, coded lights speaking a language that spell their name, is often missed by our own ignorance. Not all have intonation of a fog horn to add to their recital.

These beacons of light mean many things o many people. Visiting lighthouses has become a favourite past-time for families and friends while opportunities have even been created in the tourism industry to use overnight accommodation at the lighthouse for an exclusive getaway – highly recommended for those who like remote and quiet coastal destinations.

With my feet solidly on the ground near or under the lighthouse, is a memorable experience every single time. Recently, however, I had the opportunity to add to my understanding of lighthouses on a passage by sea, like the mariners of days gone by. Passing no less than 11 of the lighthouses along the West Coast with a view from the ocean, rekindled my interest in the real importance of these beacons of light along the Cape of Storms and our rugged West Coast, clearly not only aesthetic decorations for tourist interest!

The first lighthouse in recorded history was erected on the island Pharos, near the busy port of Alexandra, in the norther-most part of Egypt. The legacy of Pharos lives on in the root of the word for lighthouse in many languages, such as “faro” in Italian, “phare” in French or “faro” in Spanish. In English the word “pharology” means the art and science of lighthouses and signal lights.

By the twelfth century, France and Italy were most advanced in erected lighthouses along their coastlines. Not less than 1500 lighthouses can be traced on navigational charts of the time. The most significant developments for lighthouses were in the field of optics, whereby a relatively small flame could be intensified to a powerful beam of light. In this process, the development of the dioptric, reflective lens by a French physicist Augustin-Jean Fresnel, was a profound breakthrough. This provided the opportunity to cast beams that were visible more than 30 kilometres away.

With the profusion of lighthouses protecting the lifeblood of global trade, an internally accepted system became necessary and each lighthouse has its own characteristics – a unique visual identity which is combined with a particular sequence of flashes and colours, produced by a system of timed revolutions.

Exactly on the opposite side of the continent of Africa, far from Egypt where the first lighthouse was built, we set sail around one of the southern=most points of Africa a week before Easter. Two yachts, Two Step and Pee Dee Q, went on a journey to participate in the Holiday 23 Nationals hosted by Port Owen Yacht Club.

This was a prime opportunity to view the lighthouses of the West Coast from a floating base. In my mind’s eye I could well envisage the journey of the explorer Vasco Da Gama who sailed around the Cape with a fleet of four ships and 170 men in 1497 to find a sea route to India to develop the spice trade. Da Gama was not as fortunate as we were to have these lighthouses at key points along the coast. After a few miscalculations he missed Cape Point altogether and landed at what is now known as Mossel Bay.

Setting sail from Gordon’s Bay, one’s eye is obviously clearly aimed at Cape Point, reputed for its rough waters which turns into a cauldron during strong South Easterly winds. All navigational aids are used to steer clear of the reputed Bellows and Anvil Rocks that led to the demise of many a seafaring soul. Sailing around this point and looking up at the two lighthouses is a sight to behold – an experience that will be carved into the memory of anyone, especially the first time you do it! The two lighthouses are dotted on the spectacular rocks on the point; the old lighthouse high up on the rocks was replaced by a new lighthouse as it had limited visibility in the thick fog.

Along the way to the Royal Cape Yacht Club in Table Bay, we passed the bright white lighthouse at Slangkoppunt, the bright white stark in contrast with the surrounding environment. It was built after numerous ships were wrecked between Robben Island and Cape Point.

Resembling sweet candy wrapping, the bright red and white stripes of the Green Point Lighthouse attracts attention as it is surrounded by lush green lawns in close proximity to the magnificent Green Point Stadium. Hugging the coast and before entering the Royal Cape Yacht Club for a welcoming overnight stop, we were met by the sight of the Milnerton Lighthouse standing proud in Table Bay.

Leaving Cape Town at first light, we navigated past Robben Island, very fortunate to be in glassy, calm waters. An amazing thought was that this is probably the only place in South Africa where one can view all three lighthouses from one point and sometimes even four, as Dassen Island can also be spotted from this point on a very clear day.

At Dassen Island very stormy waters pound on the north-western side of the island which is utterly treacherous for sea traffic. This is prime territory for the crayfish industry and numerous fishing trawlers could be spotted trailing along their crayfish traps, setting out bait as a daily chore. The calmbay on the other side, in contrast, is very popular overnight stop for yachts sailing along the coast and allows for fabulous views of the lighthouse on the island.

As we left Dassen Island at 5am in the morning, it was still pitch dark. My fellow shipmates gave the command: “Keep the lighthouse at your back and head straight north”. I thought by myself that this was an interesting experience; it was much more pleasant to have a lighthouse as a reference point in the dark, than no reference but your navigational aids!

After about 4 hours, sailing in a northerly direction along the west coast took us to the bright yellow and white lighthouse at the entrance of Saldanha Bay, the South Head Light. This is an area where gigantic cargo carriers venture in and out of Saldanha Bay with their precious cargo. On the northern side of the entrance the North Head Light stands proud as something resembling the decoration of a barber shop, with the signature black and white spiral band.

Numerous rocky outcrops and areas with shallow waters characterize the treacherous coastline around Cape Columbine. We had a double slammer: with the changing winds the sea started resembling the turmoil in a washing machine. To add to that the typical dense west coast fog moved in without announcement, to the degree that we struggled to keep visual contact in distances more than about 15 to 20 metres. We encountered rougher seas with swells of 3 to 4 metres, often “surfing” down one swell to the next one. We often heard the sound of fish trawlers in the vicinity without any ability to see them. We became totally reliant on our navigational aids and careful GPS positioning was done all the time. The Seal Island Beacon proved to be a saving grace from the numerous dangerous rocks in the area that are concealed by rough seas and the fog. Cape St Martin Beacon is situated on the western side of Brittania Bay and is named after the British ship that was stuck on a reef known as the “Brittania Blinder” .

The last lighthouse encountered during our journey to Port Owen was the white structure of Stompneuspunt – named after the “stump nose” fish caught locally and the nearby Stompneus Bay within the larger St. Helena Bay. This original beacon used to be a pyramidal wooden structure that was painted black with a white band. However, the brihght white structure which replaced the old structure was a very welcome sight indeed after three days at sea. Once around the point at St. Helena Bay I understood the words “plain sailing” much more clearly. Despite a reasonably strong wind of around 25 knits, this bay is a safe haven for sailors in comparison with the areas around Paternoster in bad weather.

Over and above the 11 lighthouses encountered on our journey along the western shores and coastline, there are 4 more lighthouses further north which, each in their own right, are key coastal beacons namely Doringbaai, Groenriviermond, Hondeklipbaai and Port Nolloth.

Reflecting on the experience I realize that especially along the West Coast characterized by its numerous rugged, rocky pinnacles and islands as well as the dense foggy coastline, these beacons of lights serve many vessels, from the smallest fishing boat to the biggest cargo liner. For me, during my experience sailing in a small yacht on a long journey, they became much more than lighthouses: they were truly beacons of progress from one point to another – even definitive of “destination” in the open sea, as in the case of DassenIsland. What we make of them is probably in the eye of the beholder.