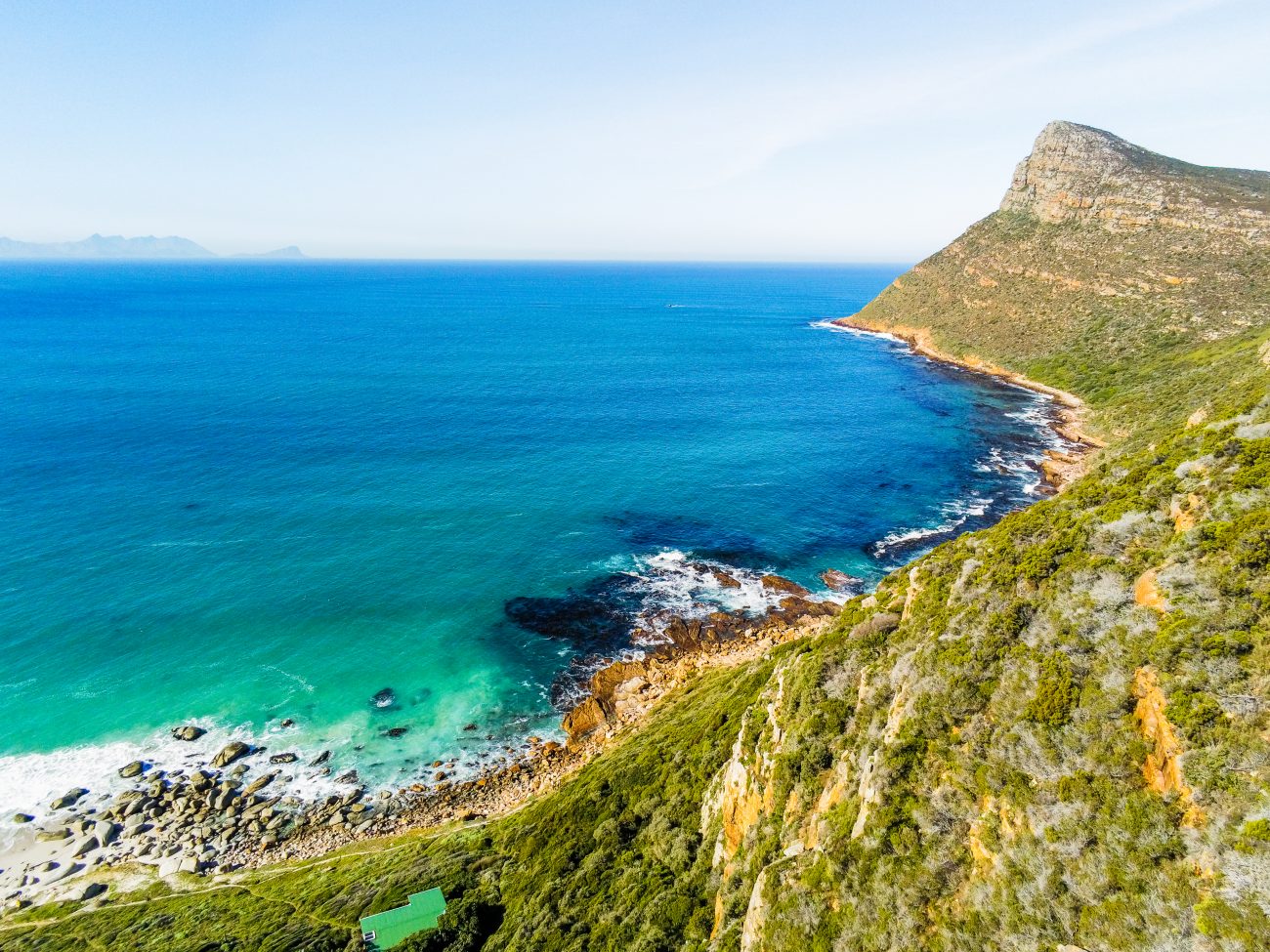 “The remote village of Smitswinkel Bay reminds me of the remote village Postberg in the West Coast National Park. The biggest difference is there is no vehicle access road in or out,” writes Marzahn Botha.

If I was a piece of driftwood floating in the never-ending ocean, I would have waited out my chance to find my way to the tranquil beach of Smitswinkel Bay.

“Yes”, says a non-permanent resident, Lawrence, or Larry Hutchings (73) jokingly: “That would have made a nice rest bench.”

Whenever a resident or homeowner finds a piece of driftwood on the beach they use it to fill a gap in a house because the store is just too far. No wonder Larry says his home was built by “it fits where it touches carpentry company”.

The meaning of the town

Smitswinkel Bay finds itself nestled in under the Swartkop Peak, between Simonstown and the Cape of Good Hope National Park. There is no coastal contour path that leads to Cape Point, approximately 15 km from here.

Larry is a retired marine biologist that resides in the town of Noordhoek. “Smitswinkel Bay inspired and forced me to study marine biology,” says Larry.

He says the small community’s name originates from a farmer with the surname “Smit” who owned this piece of land, however, the date is unknown. In 1916 it was proclaimed as a camp-site and they had a big celebration in 2016.

Another reason for the name might be the two prominent rocks on the beach that resemble a blacksmith’s anvils. The bay also resembles a horseshoe with the Swartkop Peak on the one side and Judas Peak in the Castle Rock restricted area far below. Visitors usually park their cars on top then hike down. From the top, you have a panoramic view of the community and the kaleidoscope of colours of the deep blue and the turquoise sandy patches.

Here is no shop or no path for any vehicles. Every door, window, or piece of timber was carried or shipped in.

I met up with Larry on the top of the tar road before we zig-zagged down a footpath for almost 20 minutes. Residents usually park their cars around a corner opposite the entrance of the Cape of Good Hope National Park.

“This bench is in honour of the deceased Roy Sadden that used to live here permanently. “He was a fisherman that retired by the age of 40 and came to live here until he was in his early eighties.”

Roy loved his wine and rumour has it that he could consume about 5 l a day. I wonder if he carried it himself down the hill or did a trawler ship it in?

According to Larry his friend Roy always used to say: “Isn’t it nice to do nothing and then rest for a while.” Word has it that Roy died in the village and his body was carried back up with the short footpath we are currently on. “No permanent residents are residing here at the moment. During lock down Smitswinkel was busy. This was the perfect hide-out where you minded your own business.”

“The upside of living here is that the place can never get overcrowded or flooded with tourists. But it means that you also should carry every single beer or bottle of wine down and back up again. Hopefully, the wine bottles are empty by then. Larry says he usually keeps one in his wooden house, but with the second ban on alcohol, it is long gone. As we were heading down to his house he mentions that the fynbos vegetation near the houses hasn’t burned in over 100 years.

If you make the sums Larry was only a laaitie when Smitswinkel became his playground.

“About 12 houses were added from then to now. But the prices escalated tremendously. The last property was sold for R4 to 5 million, it’s too much I don’t even want to think about it. Even our levies with the City of Cape Town costs far more now,” says Larry. Come to think of it, you buy so much more than a place with the minimal infrastructure, no roads, and a bad cell phone connection – you buy privacy and the ultimate safe seclusion in wild nature.

“We were three kids that helped carry appliances and building equipment in. The house was much smaller so my dad made it bigger and included another room. Today, although simple in aesthetics, the open plan wooden house with a nice fireplace is big enough for twelve people.

“I have solar panels that generate about 35 W. The bigger houses use about 80 W and have bigger panels. Otherwise, we use paraffin stoves as well.

“All the houses have septic tanks and we get our water from the mountain streams that flow into the natural fountains, and then to the houses. Most of the residents also have water tanks.”

Larry is not happy with the quad bike route that runs past his house towards the sea. This quad bike path was opened in 2002. Only one quad runs between houses to make life easier for some residents. But not all the residents were in favour of this noisy motorbike, especially Larry. Let’s leave it at that…..

Years ago my friend Anel Naudé introduced me to Smitswinkel during a September month when the beautiful flowers were in full bloom. It reminded me of the flowers at the West Coast National Park, with the water turbulent and dark blue. The turquoise edges are similar to the Laguna.

On the opposite side of the bay, about 30 sea miles from here lies the Hottentots Holland Mountains. The mouth of False bay is formed by Cape Point to the west and Cape Hangklip to the east.

This time Anel and I hiked to the look-out point and shark spotting hut close to the National Park’s fence to get a different perspective.

“I always feel that Smitswinkel Bay has a way of resetting me. “You never feel the same with the decent and coming back up. It feels as if you dealt with some baggage,” says Anel.

If you follow the beach you reach the same fence that is the barrier between the community and the Park. “In the summer the residents use the big rock pool close to the cave to swim. The beach has much less sand due to wind and current forces that wash the sand away in the summer and deposit it on the beach in winter times.

“Most people that live here are active outdoor people. During my university years, I dived, angled, and surfed. My son earned some pocket money by helping out fish trawling. The most fish that was caught in one day was 47 tons of geelstert. That really is a lot. They would leave the fish under the erected canopy on the beach and help with the other nets,“ says Larry.

“It is sad to see how the fish population is depleted. We all were the cause of this. Some of us could catch up to 40 galjoen a day, and plenty of red stumpnose fish and harders in one go.

By the looks of it, Smitswinkel is still a popular place to angle or spear fish – on my way down I passed some divers on the bridge called the “Jolly Keen” bridge.

“The water is too cold, the fish doesn’t want to bite. I am going to make myself some tea, are you ladies keen to join me,” asks Larry. “I usually have a cup of tea before I head back home.”

Larry mentions that his wife Audrey loves their holiday home but that she feels a bit sick today to walk down.

“You buy a place to pass it on to your children when you get old. I want to give it to them just like it is. Simple. They can decide what they want to do with it.

“New residents always have a lot of ideas on how to make a place better. I often hear: It’s nice, we must improve it.”
But I say no: The magic of Smitswinkel is its perfect simplicity. It was the first place I brought my girlfriend to. for those years. Why should I be shy of it today?”

Smitswinkel Bay’s beach is open to day visitors. Bring enough water and snacks if you are going to spend some time here. It is quieter in the week. Go in the mornings because it can get windy during the afternoons.

Make sure you know your tides.

Please don’t feed the baboons, they can be dangerous.

TELEPHONE NUMBERS
You can get a day hike permit for a hike from Simon’s Town to Smitswinkel Bay.Phone. 021 786 2329.
Phone Pices Divers @ 021 786 3799 if you want to dive on the reefs in the area.Smitswinkel Bay also have a tented camp that belongs to SAN parks Phone them at www.sanparks.org