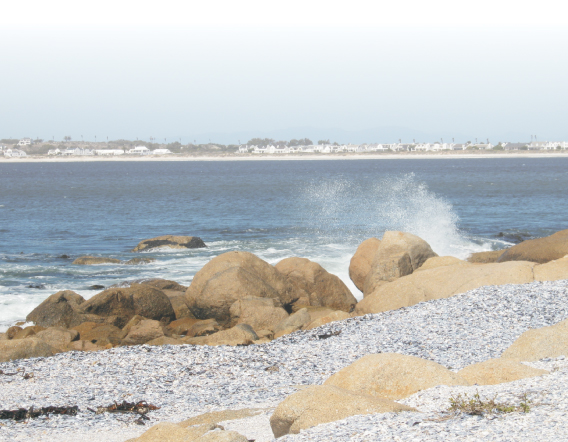 Did you know? The village is situated in such a way that it is the only place on the West Coast where you can watch the sun rise over the sea. Known as the bay of bays, there are 18 bays, stunning sea views and sparkling water, to make this a very special destination.

The Portuguese navigator Vasco da Gama sailed into the bay in 1497 near the mouth of the Berg River. He named it the Bay of Saint Helena in honour of the pious mother of Emperor Constantine the Great. In 1969 the government of Portugal erected a granite monument to commemorate this event, which still stands on the shores of the bay between Sandy Point and Stompneus Bay.

St. Helena is important culturally owing the fact that not only did Da Gama discover a sea route between the West and the Far East, but with his arrival, Africa was introduced to Christianity. The beach at St Helena Bay was the first place in southern Africa where the Paternoster (Our Father) was said, and the village of Paternoster was named in honour of this event.

The unique flora and the eerie granite outcrops found in St Helena Bay are the result of an interesting natural phenomenon that occurred during the Ice Age. It simply didn’t arrive! As such, the region has remained throughout the ages.

The West Coast Fossil Park offers students, school children and the general public an opportunity to have an on-site fossil experience. Otherwise, St Helena Bay is the ideal place to explore the West Coast, with activities like whale, dolphin and bird watching being very popular.

St Helena Bay is one of the World’s principal fishing centers. The cold Benguela Current surges upwards along this part of the coast and brings to the surface large concentrations of nutrient salt. Huge schools of anchovies and pilchards (before they were depleted by over fishing) fed in the area of plankton which flourished on the nutrient salts. Twelve busy fish-processing factories were established along the 21km curve of shore from West Point to Sandy Point and Stompneus. The bay is also known for its snoek, especially during the winter months.

The southern right whales come annually from the Sub-Antarctic regions to calve & mate during the months of June to November. Humpback whales may be sighted during the months of October and November as these animals migrate south from their breeding grounds, tropical West Africa to their feeding grounds in the Antarctic. The Bay is also popular for the dolphins; schools of over 1000 have been sighted at times. The bay also hosts a variety of marine birds, penguins and large colonies of seals.