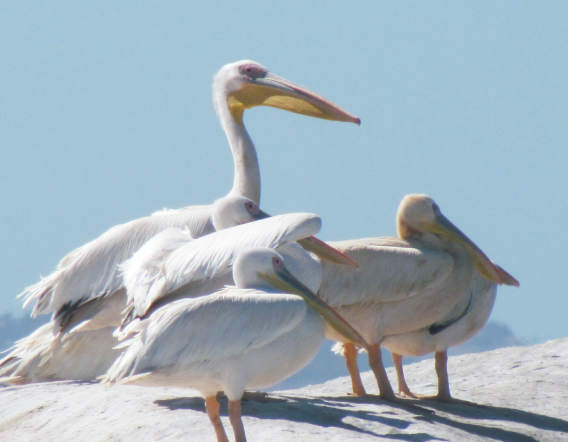 When the local gannet population on Malgas Island in the Saldanha Bay area failed to raise any chicks in a breeding season a few years ago, alarm bells went off and research identified the culprit as none other than the pelican. But why this sudden change in food source. And what can be done about it?

Every Year at a certain time a few residents of Langebaan area would disappear for a few and and someone will say, “Oh, they’re on Pelican Watch”. Eh? What? Where? Oh, it’s like birdwatching, is it? Np. It’s more like bird chasing, except it is not, actually. It is more like encouraging them not to stick around, or come too close. Or something. So I asked Alec Celliers, chariman of the Honorary Rangers of the West Coast National Park, if they could shed some light. I came away with plenty of information and lots of photographs supplied by Heidi Duncan, taken by volunteers on the islands during “Pelican Watch”.

The Pelican Watch programme is a SANParks management strategy aimed at alleviating the distastrous effects on the breeding success of Cape Cormorants on Jutten Island and Cape Gannets on Malgas island caused by Great White Pelican predation on their hatchlings. The phenomenon of pelicans occassionally taking the young of the other seabirds has expanded hugely in recent years. This phenomenon has been driven by a pelican population expansion, caused by availability of agricultural offal to the pelicans in local farmlands. The population expansion has meant an increased pressure on the “natural” food sources for the pelicans and because the drying up of artificial food sources (the agricultural offal) on which pelicans relied until the year 2005, the pelicans searched for alternative food sources. Since that moment, predation pressure on seabirds has intensified in an alarming manner. Some of the prey species (cormorants and gannets mainly) are already under stress from other factors and this additiional load on their numbers threatens their survival on the Cape West Coast.

The programme involves teams of Park staff and volunteers working in five-day shifts on the islands during the sea-bird breeding season. It consists of physically chasing pelicans that land onto the island, so that they fly away from the breeding colonies and/or the islands. However, this has to be done in such a way that disturbance of the cormorants and gannets are minimised.

The Great White Pelican is widely distributed species in Europe, Asia and Africa. The Southern African population is distributed along the western coastal region from Namibia to the Western Cape and in the St Lucia wetlands of Natal.

They breed annually at Bird Rock in Walvis Bay, on Dassen Island off the southern extremity of the West Coast National Park, and at St Lucia.

The Southern African Great White Pelican is classified as “Near-Threatened” owing to its small number of breeding sites.

The population growth was initially due to the availability of safer breeding environment on Dassen Island, where they started breeding in 1956, and subsequently to the availability of artificial food sources, mainly agricultural offal at piggeries in the Stellenbosch area. At the end of 2004, an average of 1 500 pelicans (more than 60% of the regional pelican population) fed daily at these localities.

The offal supply at the piggeries decreased after 2004, and it led to mass mortality of pelicans at the pig farm in July 2005. Since, the pelicans had to find alternative food sources. It seems that the situation becomes acute during the breeding season, as this is when they experience inceased energy needs for raising chicks.

Pelican chicks are raised every year in the period between October and January of February. This coincides with the breeding season of cormorants, gulls and gannets on the West Coast offshore islands. From the mid-1990s, pelicans increasingly predate on the hatchlings of these other birds on the breeding islands close to Dassen Island, in order to meet their increased food requirements during their own breeding cycle.

Wild Great White Pelicans have not been recorded eating other seabirds anywhere outside of southern Africa. They are primarily freshwater-fish eaters.
However, within the southern African region there has been occassional reporting in the past of pelicans predating other sea birds. This, however, was uncommon phenomenon that did not pose a threat to the populations of species that were taken.

Systematic predation of seabird chicks by pelicans was first noted in the mid-1990s at their breeding colony on Dassen Island, where it resulted in low breeding success of Kelp Gulls and Cape Cormorants, their main target species. Ocassionally they were observed capturing other species like Swift Terns and African Penguins. Pelican predation on seabirds intensified during the 2005/06 and 2006/07 seasons (conciding with the cutting off of the piggery offall supply, when they extended their range to Malgas to attack and capture gannet chicks. They also visited other islands in the West Coast and some colonies of water birds in the mainland, and they disturbed several species of seabirds and water birds. In the breeding season 2006/07, they caused total failure of the breeding effort of the Cape Cormorant and Kelp Gull colonies on Malgas, Jutten and Schaapen islands. At this time they also wiped out the Crown Cormorant colony on Dassen Island and Swift Tern chicks onSchaapen Island and they were seen scouting Kelp Gull breeding areas on Robben Island, where they had not been seen for at least 10 Years. Five pelicans were also chased off Dyer island where they had not been seen since since the 1930s, and where they had landed amongst nesting Cape Comorants. Pelicans were also reported eating coot and ibis chicks on some fresh water localities in the region.

The Pelican Watch Programme is located on Jutten and Malgas Islands on either side of the entrance to Saldanha Bay.

Jutten Island sits on the south side of the entrance to Saldanha Bay, it is 900 metres across at its maximum and has two hills towards the south end. Most of the Island is visible from the top of these hills, and they serve as a vantage point for the pelican watch programme. There is a cluster of mostly derelic buildings that used to be the base for guano collectors. One of these old houses has been refurbished to the very basic standards to serve as accommodation for the Pelican Watch.

The primary objective of the Pelican Watch programme at this stage is to protect the nestlings and juveniles of the Cape Cormorants on Jutten and the Cape Gannets on Malgas from predation by pelicans.

Jutten was selected for the progreamme as it supports the greatest concentration of breeding Cape Cormorants in the West Coast (currently Dryer Island in the South Coast holds the largest colony of these birds in South Africa) and thus the greatest degree of protection can be provided with the resources available. Malgas was included to relieve the threatened Cape Gannets population, already under stress from several other factors, of the additional threat of pelican predation.

Cormorants and gannet youngsters are protected from the pelicans by simple, i.e. by chasing the pelicans away when they come on to the breeding islands.
The effectiveness of this approach was demonstrated by the result of controlled trial that was carried out on Jutten during the 2007/08 breeding season. In this trial half of the island was designated as a “pelican-free area”/ The pelicans that came into the area were chased off. The other half of the island was deemed to be “pelican territory”, where pelicans were left undisturbed. Monitoring of the breeding success of the Cape Cormorants in the two areas showed that in the pelican-free area 0.72 chicks per nest were fledged in the study colonies (within normal rates for the species), whereas no cormorant chicks at all survived in the study colonies in the pelican territory.

The programme is carried out by relays of teams of two to three volunteers, usually accompanied by a Park ranger, living on the islands for five-day periods and maintaining a dawn to dusk vigilance system for pelicans coming onto the islands.

The basic task is to walk towards any pelican that have landed on the island. Being quite skittish, the pelicans usually fly off when approached to within about 50 metrres. However, they may settle elsewhere on the island, and the process has to be repeated until eventually they depart the island.

Pelicans may arrive to the islands in small groups or as many as 30 or 40 individuals at a time, and the frequency of visits may vary between five or six times a day to none at all.

Accommodation on the island is basic, and while it is possible to be quite comfortable, it is necessary to adjust to the more basic conditions provided on the islands. There are beds and matresses, gas fridges and cooking tops and utensils. Volunteers need to take their own bedding, food, cutlery and crockery.

Drinking water is provided to volunteers and rangers by SANPARKS and taken to the islands with the shifts in 25 litre plastic containers. Some water is collected in concrete cisterns from the roof runoff and is retrieved by bucket. There is no running water. Limited power for lighting, cell phone charging, and laptops is provided from a solar panel connected to a battery cell setup. There are no heating facilities or washing machines, TV or DVD equipment, etc.

Pelican duty on the islands is not for the fastidious, the sensitive or those with mobility difficulties. Age is not a problem given a moderate level of fitness. There are not many opportunities elsewhere for the non-specialist or the non-professional to live and work in a teaming bird colony and the intimacy of one’s association with the birds is truly memorable. There is also a personal reward of doing something tangible, necessary and very worthwhile in protecting the upcoming generation of our seabirds from real and present threat – and a largely man-induced threat at that.